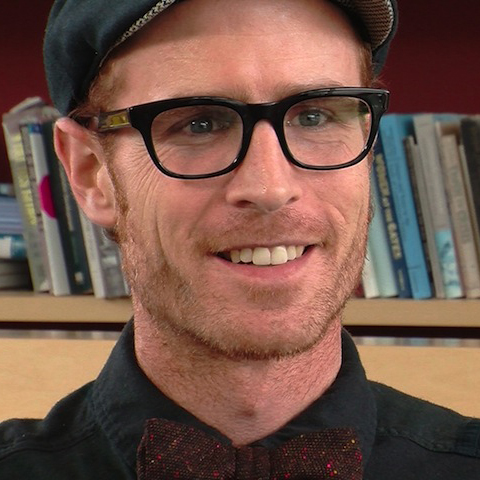 Ian Alden Russell is an artistic director, curator, and educator; he is currently the artistic director at the Mattress Factory. At the time of filming he was the curator of Brown University’s David Winton Bell Gallery and a lecturer in the Rhode Island School of Design’s Glass Department. Previously, he was an assistant professor of Curating and Contemporary Art at Koç University in Istanbul, Turkey. His projects at Brown included Melvin Edwards Festivals, Funerals, and New Life, Pierre Huyghe’s Untitled (Human Mask), and the premiers of Fatma Bucak’s And men turned their faces from there, Vincent Valdez’s Strangest Fruit, and Wafaa Bilal’s The Ashes Series. Other projects have included the Irish premier of Mark Dion’s Against the Current at Ormston House in Limerick, Ireland, contributions to the Safina Radio Project at the 56th Venice Biennale and commissioned research for  “Socially Engaged Art Practices and Education in Contemporary Discourse” at UNIDEE, Cittadellarte-Fondazione Pistoletto in Biella, Italy. His writings have been published by Cambridge University Press, deCordova Museum & Sculpture Park, Museum of Contemporary Art, Chicago, Oxford University Press, and Springer-Kluwer. He holds a Ph.D. in History from Trinity College Dublin and has held fellowships at Brown University, the University of Notre Dame, and University College Dublin.

Russell’s videos are used in these Choices Program curriculum units:
The American Revolution: Experiences of Rebellion
Between Two Worlds: Mexico at the Crossroads
China on the World Stage: Weighing the U.S. Response
The Civil War and the Meaning of Liberty
Empire, Republic, Democracy: Turkey’s Past and Future
Nigeria: History, Identity, and Change
Racial Slavery in the Americas: Resistance, Freedom, and Legacies
The Russian Revolution

VIDEOS
What is the value of art?
How is exploring art useful as a way to learn about other societies?
What can art reveal about history or current events?
Who are you and what do you do?
How do you choose art for an exhibit?
Ilya Repin, Barge Haulers on the Volga, 1870-1873
Dorothea Lange, Destitute peapickers in California, 1936
How do you go about analyzing a work of art?
Back to top