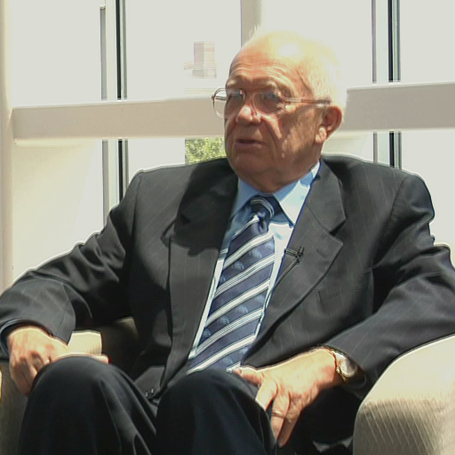 Sergei N. Khrushchev was the son of former Soviet Prime Minister Nikita Khrushchev. At the time of filming, he was a senior fellow at the Watson Institute at Brown University. He earned his Soviet doctoral degree from the Ukrainian Academy of Science and a PhD from the Moscow Technical University. Prior to coming to the United States, he was in charge of research at the Control Computer Institute in Moscow where he worked cruise missiles for submarines, military and research spacecraft, moon vehicles, and the “Proton,” the world’s largest space booster.

Khrushchev was a regular commentator for the U.S. media and the author of more than 250 books and articles on engineering, computer science, history, and economy. His books include Khrushchev on Khrushchev (Little Brown, 1990), Nikita Khrushchev: Crisis and Missiles (1994), The Political Economy of Russian Fragmentation(1993), Three Circles of Russian Market Reforms (1995), Nikita Khrushchev and the Creation of a Super Power (Penn State Press, 2000), and Khrushchev in Power (Lynne Rienner Publishers, Inc. 2014). His books have been published worldwide in 12 languages.

In 1967, he began to help his father, Nikita Khrushchev, work on his memoirs. The full text of the memoirs,The Time, the People, the Power, was published as four volumes in Russian in 1999 by Moscow News. He has also edited the memoirs in English to produce the three-volume Memoirs of Nikita Khrushchev as a joint project of the Watson Institute and Pennsylvania State University.

We mourn the death of Sergei Khrushchev in Rhode Island in June 2020.
He was our colleague and friend.

VIDEOS
What was the Cuban Missile Crisis like from the Soviet perspective?
What was Nikita Khrushchev like as a person?
What was your father’s involvement in the war?
What are you memories of the Second World War?
Who are you and what do you do?
Why did your father join the Communist Party?
Why did you become an American citizen?
Why did Khrushchev send two letters to Kennedy?
Did Khrushchev think he could manipulate Kennedy?
How is the Cold War taught to students in Russia today?
What did the Soviet people think of Fidel Castro?
How did Khrushchev change the Soviet Union after he became leader in 1953?
Back to top