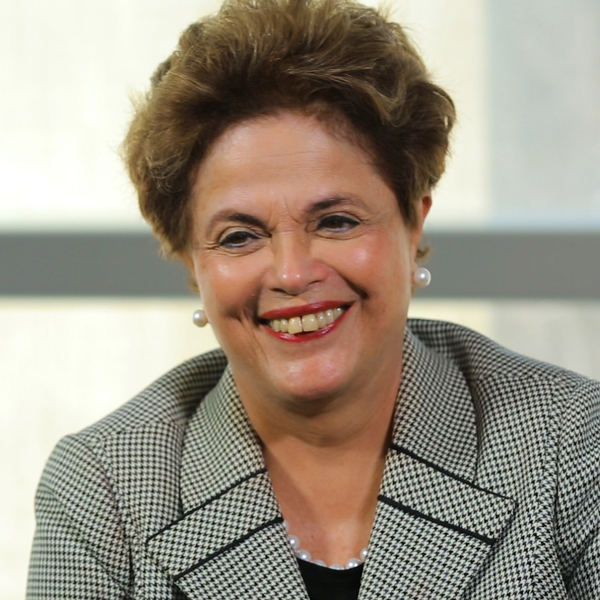 Dilma Rousseff is an economist and politician who was the 36th president of Brazil from 2011 until 2016. She is the first woman to have held the Brazilian presidency. Previously she served as the Minister of Energy and then as Chief of Staff to President Luiz Inácio Lula da Silva, who held office from 2003 to 2010.

Born in Belo Horizonte, Minas Gerais, she joined the underground movement against the Brazilian military dictatorship in 1965 as a high school student and participated in two resistance organizations until she was arrested in early 1970. Brutally tortured for ten days, she served a three-year term for violating the National Security Act. Released in 1972, she moved to Porto Alegre, in southern Brazil, to be near her husband who was still serving time for his oppositional activities.

In Porto Alegre, Rousseff was involved in the founding of the Brazilian Democratic Labor Party and served as the Secretary of Energy for the state of Rio Grande do Sul under two administrations. In 2000, she joined the Workers’ Party.

After the former trade-union leader Luiz Inácio Lula da Silva was elected President in 2002, Rousseff joined his cabinet as Ministry of Energy. Her “Light for Everyone” campaign expanded rural electrification to millions of households in the countryside.

In 2005, she was appointed the President’s Chief of Staff and served in that role until being nominated as the Workers’ Party presidential candidate in 2010. She defeated her main rival, José Serra of the Brazilian Social Democracy Party, 56% to 44% in a second round run-off election. In 2014, she received 54 million votes against Brazilian Social Democracy Party candidate Aécio Neves winning the election by a closer 51% to 49% margin.

During her second term in office she was faced many challenges in her initiatives to reorganize the Brazilian economy. In 2016 she was impeached by the National Congress for allegedly breaking a budgetary law, removed from the presidency, and replaced by Vice President Michel Temer in that office. Rousseff retains her political rights and is actively participating in debates about Brazil, both nationally and internationally.

Rousseff’s videos are used in this Choices Program curriculum unit:
Brazil: A History of Change