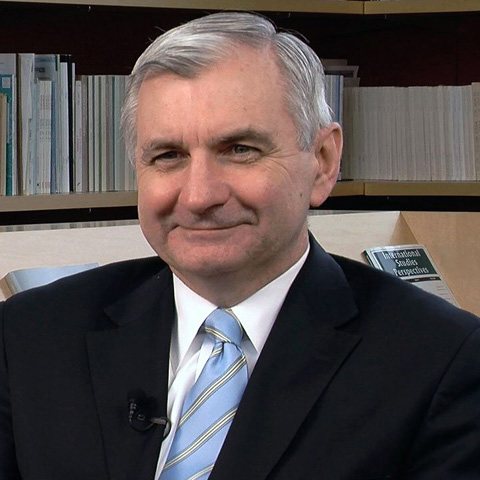 Jack Reed is the senior U.S. senator from Rhode Island (D-RI). Prior to his election to the Senate in 1996, Reed was a three-term member of the U.S. House of Representatives from Rhode Island’s 2nd Congressional District. He is a leader on defense, education, and health care issues and is a member of the Armed Services Committee and the Appropriations Committee.

After graduating from West Point, Reed attended the John F. Kennedy School of Government at Harvard University where he received a Masters of Public Policy. An Army Ranger and a paratrooper, he served in the 82nd Airborne Division as an Infantry Platoon Leader, a Company Commander, and a Battalion Staff Officer. He returned to West Point in 1978 as an associate professor in the Department of Social Sciences.

Reed received his J.D. from Harvard Law School in 1982 and worked as a lawyer in Washington, DC, and Rhode Island. He was elected to the Rhode Island State Senate in 1984 and served for three terms.

Reed’s videos are used in these Choices Program curriculum units:
A Global Controversy: The U.S. Invasion of Iraq
Immigration and the U.S. Policy Debate
The Middle East: Questions for U.S. Policy
Responding to Terrorism: Challenges for Democracy

VIDEOS
How does the United States decide if it will go to war?
What was the National Intelligence Estimate on Iraq’s WMD programs?
What is the Dream Act?
Why should high school students care about the decision to invade Iraq in 2003?
What are the biggest challenges that Iraq War veterans face upon returning to the United States?
What have you observed during your visits to Iraq?
Why do you think so few of your fellow senators voted against the resolution?
Why did you choose to vote against the resolution to authorize force against Iraq?
What was the climate like in the Senate on October 11, 2002, the day of the vote?
Did anyone attempt to amend the resolution?
What was H.J. Resolution 114 and who wrote it?
Who are you and what do you do?
How might the recent events in the Middle East and North Africa shape U.S. foreign policy?
What motivated the Bush administration to invade Iraq?
A Global Controversy: The U.S. Invasion of Iraq
Back to top