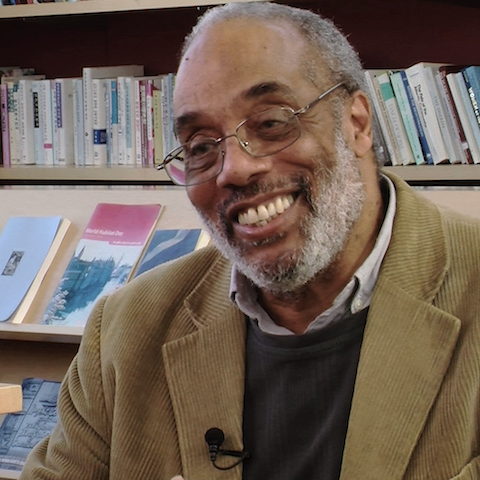 Charles E. Cobb, Jr. is a distinguished journalist and former member of National Geographic Magazine’s editorial staff. At the time of filming, he was a visiting professor of Africana Studies at Brown University and Senior Writer and Diplomatic Correspondent for AllAfrica.com, the leading online provider of news from and about Africa.

From 1962-1967 he served as a field secretary for the Student Nonviolent Coordinating Committee (SNCC) in Mississippi. He began his journalism career in 1974 as a reporter for WHUR Radio in Washington, D.C. In 1976 he joined the staff of National Public Radio as a foreign affairs reporter, bringing to that network its first regular coverage of Africa. From 1985 to 1997, Cobb was a National Geographic staff member, traveling the globe to write stories on places from Eritrea to Russia’s Kuril Islands. He is also the co-author, with civil rights organizer and educator Robert P. Moses, of Radical Equations, Civil Rights from Mississippi to the Algebra Project. His latest book published in January 2008 is On the Road to Freedom, a Guided Tour of the Civil Rights Trail. On July 24, 2008 the National Association of Black Journalists honored Cobb’s work by inducting him into their Hall of Fame.