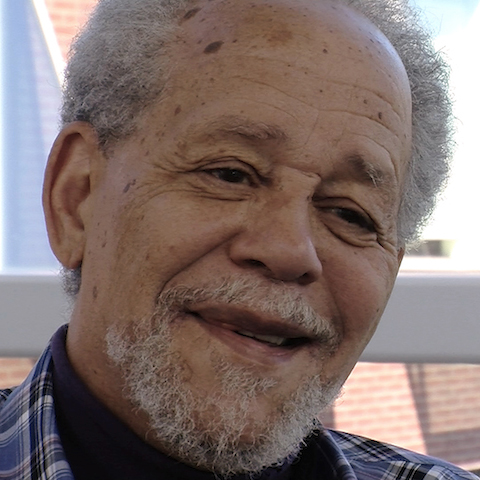 Ekwueme Michael Thelwell is a Jamaican-born writer, activist, educator, and intellectual. He was the founding chairman of the Department of Afro-American Studies at the University of Massachusetts Amherst and retired as a member of the faculty in 2009 as a professor of literature and writing. At the time of filming, he was a visiting professor of Africana Studies at Brown University.

Thelwell was active in the Black Freedom Movement, participating in the Student Non-Violent Coordinating Committee (SNCC) and the Mississippi Freedom Democratic Party (MFDP). Thelwell’s anti-apartheid activism in the 1980s resulted in successful legislation enacting a law against corporate tax write-offs for U.S.-based corporations paying taxes to the apartheid regime in South Africa. He considers this law his most effective and consequential political achievement. In addition to his political achievements, Thelwell was also a senior advisor for the television series, Eyes on the Prize.

As a writer of fiction as well as of influential essays, Thelwell’s work has been published nationally and internationally. Thelwell’s works include Ready for Revolution: The Life and Struggles of Stokely Carmichael (Scribner, 2003). Thelwell received his early education at Jamaica College. He attended Howard University and went on to do his graduate work at the University of Massachusetts Amherst.