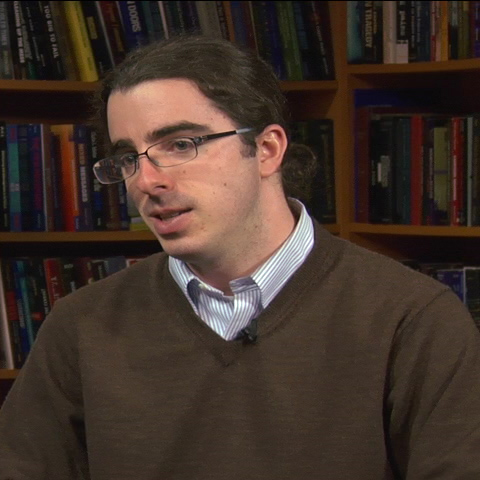 Michael Bustamante is an associate professor of history at the University of Miami. At the time of filming, he was a doctoral student in the Department of History at Yale University and a research associate for Latin America studies at the Council on Foreign Relations in Washington, D.C., a position he held from 2006-2009. He collaborated on a number of policy reports and participated in fact-finding trips to Bolivia, Brazil, and Cuba. Bustamante received his BA from Yale University. In 2005, he was a visiting student researcher at the Institute of Cuban History in Havana, Cuba. He is also co-author of “Buena Vista Solidarity and the Axis of Aid: Cuban and Venezuelan Public Diplomacy,” Annals of the American Academy of Political and Social Science, March 2008.

VIDEOS
History, Revolution, and Reform: New Directions for Cuba
Why is it more difficult to lift the embargo than to change other U.S. policies toward Cuba?
How successful has the U.S. embargo against Cuba been?
What did Cuban Americans think about the change in leadership in Cuba from Fidel to Raúl Castro?
What changes do some Cuban Americans hope to see in Cuba?
What economic changes did Raúl Castro make when he became president of Cuba in 2008?
What do Cubans on the island think about the Cuban government?
Why are there two different currencies in Cuba?
Why is José Martí such a contested figure among Cubans?
What is life like in Cuba today?
Why have many Cuban professionals left their jobs to work in the tourist industry?
What was your family’s experience emigrating from Cuba?
Why should high school students learn about Cuba?
What should the United States hope for in a post-Castro Cuba?
What is the rationale for the U.S. embargo against Cuba?
Back to top